Billy Beck III grew up the son of a hard-working father who served in the Unites States Marine Corps Special forces during the Vietnam War. At 6 foot 5 his father was a physical specimen, an incredible athlete, and a tremendous positive influence in his son’s life.

His father ingrained into his son the values of a soldier, gentleman and a fighter. For his fourth birthday, Billy received a punching bag and his first set of weights. This proved to be a trend as Billy never received a gift that did not make him better physically or mentally. While other children were given toys, Billy received gym equipment, books, and instructional sports videos – anything that would encourage and develop his athletic abilities. 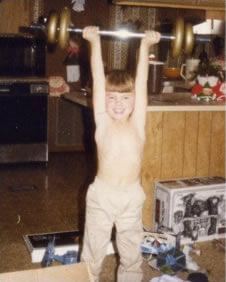 The result was a winner’s mindset at an early age. Billy took first place in a one mile race at the age of seven. This mindset continued throughout high school and college. Billy competed in many sports including football, hockey, baseball, track, boxing and various martial arts. He earned all-star status in both baseball and football and won the Mason-Dixon Victors Crown Bodybuilding Championship.

Billy has enhanced his natural talents by learning from the best of the best. His coaches and mentors include pro athletes, super bowl champions, leading strength coaches, nutritionists, trainers, physical therapists, and martial artists. From these incredible individuals, Billy received not only a vast of array of knowledge, but more importantly, a passion to excel and the attitude to never, never, never quit.

Billy took these lessons and brought them to the realm of physical conditioning, performance enhancement and total body transformation. First becoming the strength and conditioning coach for Trinity high school football at the age of eighteen and then evolving into one of the world’s most elite personal trainers.

Billy earned his undergraduate degree in Exercise Science and his Masters in Exercise Physiology. He has attained numerous certifications during his career and continues to dedicate himself to daily study and research.

He has been awarded many honors including the MET-Rx World’s Best Personal Trainer contest champion (2 times) and was named the PEAK and Personal Fitness Professional Magazine Personal Trainer of the Year. More recently, he was elected to the fitness hall of fame along side Jack Lalanne and Arnold Schwarzenegger.

Billy has been featured on NBC, CBS, Fox and ABC as well as on the pages of Men’s Health, Men’s Journal, the Pittsburgh Post-Gazette and dozens of other magazines, radio shows and interviews. He is the author of “LEAN & Mean: Fat Burning Secrets of the World’s Best Personal Trainer.”

Billy’s mission in life is simple but a powerful one – “To make our world even more awesome.”