Jack Lalanne led by example in every way.

“The guy who’s most impressed me is Paul C. Bragg. He completely saved my life. When I was a kid, I was addicted to sugar. I was a skinny kid with pimples and boils. Used to eat ice cream by the quart. I had blinding headaches. I tried to commit suicide. And then one day, my life changed. Bragg was a nutritionist. My mother and I were a little late getting to his lecture. The place was packed, and so we started to leave. But Bragg said, “We don’t turn anybody away here. Ushers, bring two seats. Put those two up on the stage.” It was the most humiliating moment. There I was, up on stage. I was so ashamed of the way I looked; I didn’t want people to see me. Little did I know they had problems, too. And Bragg said, “It doesn’t matter what your age is, what your physical condition is. If you obey nature’s laws, you can be born again.” From that moment on, I completely changed my diet, began to exercise, and went on to become captain of the football team. And do you know something? Every time I get ready to lecture, I think, If I can just help one person like I was helped…”

#4 Milk Does the Body Not So Good

“Look, are you a suckling calf? Name one creature on earth that uses milk after it’s weaned. Man’s the only one. And man’s the only one who lives out only half his life span. A cow has four stomachs. You don’t. You can’t handle whole milk.”

#3 Jack Puts the Smack Down

“Have you seen some of the crap they’re selling as exercise equipment now? …How about that Suzanne Somers? She should have been thrown in jail for selling the piece-of-crap Thigh Master. It just develops a little muscle on the inner thigh. What good is that? And have you seen Tony Little, the guy who screams on TV? He’s like an imbecile. He says you need this little thing to hold you while you do a sit-up. Why does the government let him get away with it?”

#2 Jack’s Key to Sticking to It

“I work out for two hours every morning, seven days a week — even when I’m traveling. I hate it. But I love the result! That’s the key, baby!”

#1 Your Past is in the Past. The Future is Now.

“Forget about what you used to do. This is the moment you’ve been waiting for.”

Read that again.” This is the moment you’ve been waiting for.” What are you waiting for?

NOW IS YOUR TIME 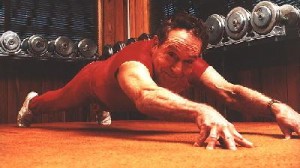 An 80 Year Young Jack Lalanne ripping out finger tip push-ups. He was truly one of a kind.

What did you most admire about Jack Lalanne?

I would love to hear your thoughts about this legendary man.