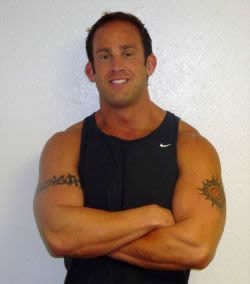 I first had the pleasure of meeting a then teenage Billy Beck when I was in high school back in Pittsburgh. We both played football together, hung out with the same social circle, and we of course eventually became friends. He and I were both known as being avid fitness fanatics when we were teenagers and we were even looked upon as being somewhat weird compared to other teens. While everyone else was out drinking booze and raising hell, I much like Billy, would be at the gym, go home drink a protein shake and call it a night. I went away to college and Billy did too. We did not really stay in contact throughout our college years and I, unlike Billy started boozing and partying with all of the other maniacs. Billy stayed on course and eventually far surpassed me in the world of fitness. After he and I got back in contact with one another, I was amazed at how much Billy had surpassed me with his knowledge and fitness expertise. Did I get that bad or did Billy get that good? The answer was I did get kind of bad but Billy was really that damn good and now he is even better.

I moved to Tampa and became a personal trainer while Billy moved to Ft. Lauderdale and did the same. I have never actually trained with Billy but he has always been and will always be my primary source of fitness knowledge. To this day, I still “borrow” some information from Billy and pass it along to my clients. Billy is now regarded as the top personal trainer in the world, and believe me as a fellow trainer, I can honestly say that he not only lives up to the hype but he surpasses the hype. I rarely use the word “amazing” but when I describe Billy as a trainer, he is truly absolutely amazing. I would highly recommend Billy Beck III to anyone who is trying to improve their fitness no matter what your goals maybe. Whether you are a novice, a fanatic, or anywhere in between Billy will take you to the next level. Almost 20 years after I met a skinny teenager named Billy Beck, it is truly an honor and a privilege to call him a mentor, an inspiration, and a friend. He truly is the world’s greatest trainer.